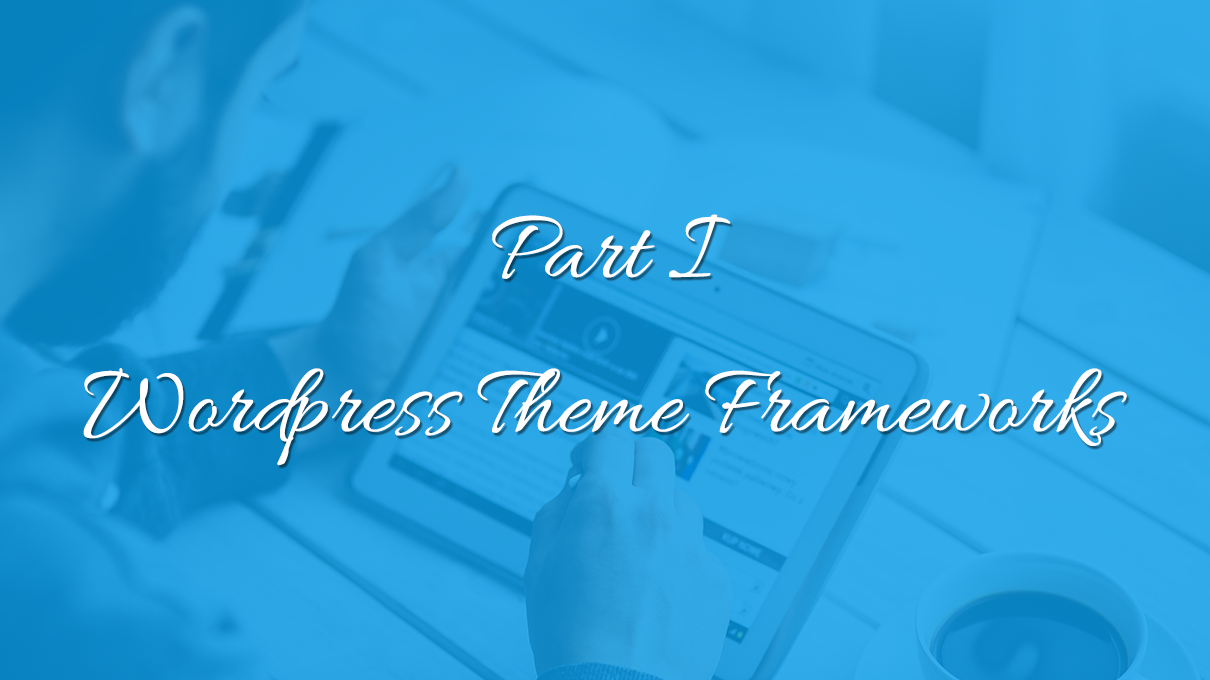 I’ve worked with quite a few of the major game players in the ecosystem and I wanted to share my experiences and thought on each one of them in the very order I started with them.

It was in 2008 that I heard about Thesis. I wasn’t much of an online shopper, neither was I much of a WordPress developer. But I was quite full of myself because I had just managed to build a WordPress theme from scratch and have it passed on to the WordPress themes directory. And oh! It was getting popular (by my standards). It hasn’t been updated in years though as of now. Thesis’s $164 was huge. It beat me why would one actually pay for a theme when all the functionality could be achieved with free plugins. Clearly I didn’t understand the ‘framework’ concept. I wrote a venomous post “A critical review of Thesis theme”.

I though would hear about Thesis very too often and would revisit the Thesis demo. There was something striking about it. I couldn’t realize it then. But it looked bold and confident. As I would realized later… Thesis even till date has the best typography on the planet! Finally curiosity killed the cat. I bought the developer’s plan of Thesis and never looked back. Thesis was one of the best inventions after MacBook Air.

Thesis 1.x had settings that I’d never seen in any WordPress theme. And they were no-BS settings–only the ones that you couldn’t live without. Each setting was well described inline so no RTFM. And I could easily expand and collapse each sections. It though beat me why I needed hooks. So with that analytical bent of mind I went to codex and tried to understand what the word ‘hook’ mean; everyday one last time. But once I got it, I had so much control, I could do what ever I wanted. Actually the default custom_functions.php of Thesis came with a commented hook and I un-commented to see what happened. I played around and got it. And I wrote another article on Thesis Thesis Theme For WordPress — A Review.

I continued to convert all my sites to Thesis and learned a lot in the process. Finally I wrote an article on how to get Thesis working with a multisite WP install. And a customer read and contacted me for help. That was my first project.

I continued to take Thesis projects and started my WordPress business with it. Late in 2010 I came across the infamous chat-interview of Chris and Matt. I listened to the entire thing. I found Chris quite aggressive. But that didn’t change my mind about Thesis. Chris was no worse than Steve Jobs. And creative people have their quirks.

The Thesis community is an intelligent community. Though there will always be beginners and pros. But a community is made up of those who survive the learning curve. I noticed the participation of byob, kristarella, sugarrae and others. There were people would report bugs, issues and others that would resolve or handle these.

Thesis 2 came in. I tried to work it out. Look pretty easy while using. But there were issues. Sometimes you could drag and drop elements to the wrong place. No comfort of your code editor where you have a CTRL+Z option. I deleted the loop element once and couldn’t figure it out. I created a template then copied it over another. Then I deleted an element that I didn’t like and apparently it was removed from the other template too. I moved the customer’s site from the development server to the production server. And no matter how I’d move the files and update the database and import into the destination server, the only way to get things working was to use the Thesis 2 backup to restore. Oh, it wasn’t what any developer would or could build a business on… at least not me.

Also just like OSX and Mac echo system Thesis came with one central feature–incompatibility. While it’s wasn’t that much of an issue most of the time, I had decided to use bbPress on my own site and I couldn’t get it to work satisfactorily. Ethically and logically I wasn’t comfortable providing business solutions on a platform that I couldn’t use myself.

While the usual disclaimer goes like IANAL; I’m though a damn good arguer at interpreting law. And for all it’s worth I didn’t see how forcing GPL benefited anyone, or how proprietary license hurt anyone. Clearly it was more about the intricacies of law and all about egos.

Rude, obnoxious or whatever, I still respect Chris as a genius. Thesis 2 was way ahead of its time. Sure there were other drag and drop themes around, but grep into the code of Thesis 2 and you’d realize how frameworks are architected. Dynamic hooks and filters everywhere… there was no way anyone could document them in entirety. I did manage to put up the first ever tutorial on how to create Thesis boxes.

And I respect Chris’s choice for being upfront about his license choices as against those who use the GPL seal and chicken out with excuses. Interestingly after the debate I contacted various theme developers to see if I could reuse their code as per GPL. And got some reply like these:

<theme> is indeed GPL and yes, you can create plugins and themes for use with it, freely.

The only thing we ask is that you do not redistribute <theme> with your child themes or plugins, and that you direct users to purchase <theme> from us.

While we don’t actively discourage the bundling of <theme> per GPL, you will need to word things in such a manner so as to be completely clear that you are not selling <theme>, as resale is against our TOS.
…We must kindly request that you respect our protected trade names, <trademark 1>, <trademark 2>, <trademark …n>, as our IP attorneys monitor the web for promotions that detract from our salable use of the terms.

Of course that’s just one side of the story. I received responses from others who were pretty open about users’ rights as per GPL.

You are free to use our themes for your clients as per GPL.

The point is regardless of your license inclinations, I’d rather participate and build into a community where the devs are more open and honest and integrity is valued above anything else. And that’s irrespective of the code or product quality. Because it’s the values that make or break a community and it’s the values that determine how long lasting a fan-base and goodwill you build.

Either ways I was furiously looking for alternatives because the drag-and-drop was more targeted at end-users and it wasn’t really developer friendly (or usable). But I continue to be a fan of Chris, his honest, outspoken approach, creativity and sheer genius and skill. Part 2 is about Genesis and you can read it here. Part 3 is about Hybrid and you can read it here.